Tribute to a Heart Dog

Gyro (G’s Torpedo), a.k.a. “The Big Red Dog”, was born on July 4, 1998, one of nine puppies in his litter. He was a big boy who wasn’t built for cornering and didn’t have much desire to race, so he was retired quickly. Unfortunately, he was not sent immediately to adoption, but instead was sold illegally to Guidant for pacemaker testing. Of the hundreds of dogs sent to Guidant by Dan Shonka, Gyro was one of the very lucky ones found alive. When people ask me if my dogs are “rescues”, I tell them that Gyro certainly was.

Gyro came to GPA Wisconsin from REGAP – MN and had been bounced from one home when we met him. We wanted a big, fawn male dog to keep Aiko company. We took Aiko to the kennel to meet him, and took him home. At the time, we only had one car, an Acura CL, and we put both dogs in the back seat. About a quarter-mile from the kennel, a spat broke out in the back seat, so Terry moved to the back seat with Gyro and Aiko sat in the front seat. We bought a Subaru Outback two weeks later. Aiko was the alpha of the two dogs, and Gyro was perfectly happy with that.

When we got Gyro, he was 15 pounds lighter than his racing weight. He had no fur on his hind end and most of his tail. On his tail and halfway up his back, there was a sore at each vertebra, from putting too big of a dog who was way too bony in too small of a cage. The vet who did his neuter said that she had never seen a dog so terrified of the vet clinic, and it made her shudder to think of what he had endured. We wondered if the experimentation would lead to him having a shorter lifespan or other complications; no one knew because no dogs used for testing had ever made it out of Guidant alive. I vowed that, no matter how long or short his life was, he would know security, warmth and love.

We could see all of his ribs, and feel the scars from where the pacemaker leads had exited his neck. It was almost painful to pet him; he was so bony, and what fur he did have was so thin.

But I couldn’t not pet him, for even after all he had been through, he sought affection above all else. As I sat in the floor with him and gently brushed him, he fell asleep with his head in my lap. From these very first moments of our relationship, he was visibly grateful for everything he had. I could not believe how trusting and loving he was, given what humans had done to him, and it was the first time I cried because of him.

We soon found out why Gyro had been bounced from a previous home. During his first two months, we made 4 emergency vet visits, and one call to poison control. He ate a giant bar of dark chocolate, he cut open his tail falling down from excitement of us being home, he had an orgy of garbage in the kitchen, he ate a 5 lb bag of brown sugar (and proceeded to vomit it up all over the house, so the carpet was never the same), and he and Aiko got a hold of a box of corn starch and flung it all over the house (the splatter patterns indicated they had been flinging with great abandon).

We never considered giving him back.

He became so closely bonded to Aiko that, when she bit through one of my asthma inhalers and spent a week in the emergency vet, we had to take him with us to work or else he would completely upend the house out of separation anxiety.

Though we were told his bare patches would never fill in, they did, and his fur became beautiful and soft. We soon learned that he had a talent for finding the softest, comfiest spot in the room, which he would usually try to make better by nesting. His nesting led to the death of at least 10 fitted sheets, several dog beds, and one leather couch. He learned quickly that nesting was a no-no, so he became very stealthy about it.

They say that dogs don’t have the same concept of time that we do, but Gyro always knew when it was the weekend. Sunday was “cuddle day” and he would insist that he be allowed on the bed and as close to me as physics would allow.

I had hoped that we would teach Gyro that people weren’t all evil and out to harm him. What I didn’t realize is how much Gyro would teach me. He taught me to love with a completely open heart, to treasure each day as a gift, and to be grateful for everything I have. He taught me that you don’t need words to express love, and that love is about being there even when the one you love is at their most unlovable. He taught me that you don’t need to be in charge to be special, and that helping others to laugh and to love is an immense gift.

Because Aiko was older, and had some health scares, I always assumed that we would lose her before Gyro. Because he relied so much on her for guidance, I knew he would be lost without her. So, in late 2005, we decided to adopt another dog. We wound up with two completely insane brindle puppies, Nano and Mac, who are brother and sister from an “oops” litter, who had spent their first year outside. While all the dogs got along, the pups were so close to each other already, that Aiko and Gyro remained most closely bonded.

I am practical enough to know that it is likely I will outlive all of my dogs. But it was only Gyro’s passing that I ever gave thought to, because I knew it would crush me. Long before the terribly diagnosis of bone cancer, I would hold him, pet him, and cry about how much it was going to hurt to lose him.

In mid-April 2009, he started to limp. I had the flu for nearly two weeks, and he rarely left my side. I think he waited to show how much pain he was in until he knew I was recovered. On May 6, 2009, he was diagnosed with osteosarcoma in his left rear leg. I felt like my world had come apart. After careful consideration, we decided to amputate and do chemo. His first amputation surgery was May 27th, and due to complications from the surgery, his second amputation surgery was June 26th, one day before my birthday. We started chemo as quickly afterwards as possible, and made it through four rounds before we decided that the decrease in his quality of life wasn’t worth it.

All things considered, he recovered very quickly from the amputation and the chemo treatments, and had several months of happy, bouncy, stubborn, loving, pain-free living. We made the most of this time. Although I had always cherished him, I went out of my way to make sure I spent as much time loving him as I could muster. From the day of his diagnosis on, he slept in the Tempurpedic bed, tucked between Dana and me, so that he would be comfortable and unable to fall off the bed. I baked a cake and we had a huge 11th birthday celebration for him. I cuddled with him as often as I could, and on every Sunday. He learned how to nest on three legs and I didn’t scold him for it. He ran around in the back yard, and was stubborn about coming inside – he always loved the back yard.

In mid-November, it occurred to me that it had been a while since he had rolled over on his back. Shortly after this, we noticed increasing weakness in his remaining rear leg, but thought it might be because he spent a lot of time standing up. By early December, it seemed like something was really wrong, so we made and appointment to take him to Gainesville, where we received the awful news that the cancer had spread to his spine.

As Terry and I headed back with Gyro in the MINI, Dana put up the Christmas decorations so Gyro would have some time to enjoy the Christmas spirit.

Gyro continued to be an amazing trooper as his body failed him. His weakness became total disuse of the back leg, so we had to carry him into the yard like a wheelbarrow. He adjusted quickly and with grace.

Early in the morning on December 18th, I awoke to him wetting the bed, and knew the end was very near. In all the years he was with us, he only once made a voluntary mistake inside the house – and that was the day after we picked him up. We did our best to help him relieve himself outside, and I kept looking for him to let me know he was ready to go.

On December 19th at 9:45 PM, as I held him in my arms, I heard him tell me he was ready to go. I promised him I would be OK without him, although I would miss him every day of my life. Not being much of a spiritual person, I was unsure if I’d really “heard” him, or if it was just my mind playing tricks on me. So, to drive the point home, he suddenly stopped eating.

As quickly as we could, we rounded up a vet who would come to the house. It was important to us that he not be in a medical setting during his last moments. I wanted him to be on the bed, surrounded by love. With the vet on the way, he became very insistent that he wanted to go outside, so I took him. He didn’t go to the bathroom at all; he just walked around the yard, visited his favorite places and soaked up the sunshine. And then, on the darkest day of the year, December 21st, at 4:15 PM, his heart beat for the last time as I held him in my arms. I felt his spirit pass through and mingle with mine and I knew the instant that he was gone. The sunset that evening was spectacular, lighting up the sky with brilliant orange and red.

I had thought that it was so cruel and unfair that I would lose Gyro, my heart-dog, the love of my life, first. But then I realized that this was simply his last lesson to me – how to let go of one you love.

I will truly miss him every day for the rest of my life. 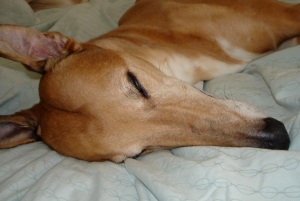