Dogs can bite. Their teeth can scratch, puncture, crush, rip and avulse living tissue. Children generally receive dog bites to the face because they are short. Adults are more likely to be bitten in the hand or leg. Obviously, the greyhound adoption movement wouldn’t be such a success if the breed has a high level of aggression toward humans. I am aware of a number of greyhound bite incidents and that greyhounds that are exhibiting aggressive behavior toward people. 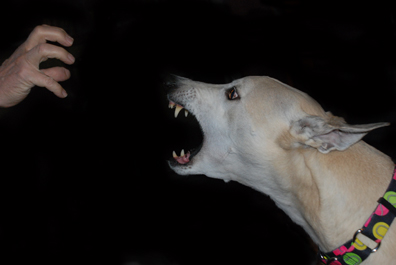 A bite can seriously damage a hand. Note; this dog had no intention to bite. Joanne Johnson

I’ve developed respect for the power of dog jaws and teeth from working as an occupational therapist/hand therapist for six plastic and hand surgeons in their office and surgery center for the past sixteen years. We have a steady trickle of clients with dog bite injuries. The miracles of plastic surgery may still leave scars, and in some cases, a lot to be desired. The woman who leaned over to greet her employer’s dog and had her nose bitten off will never be quite the same. Nor will our current patient who lost the end of his thumb from a dog bite.

The surgeons I work with see approximately twice as many children with dog bites as adults. The children tend to be between two and five years old. The most common facial bite involves the nose and cheek where the dog bites completely through the skin but does not tear off or avulse tissue. The dog slightly opens its jaw to release the skin. Fortunately, severe avulsion injuries causing tissue loss are rarely seen and are done by extremely aggressive dogs. One surgeon’s eighteen-month old son was bitten in the face by the family dog, resulting in three days of hospitalization for the child and euthanasia for the dog. It seemed to happen out of the blue but the dog had not been adjusting well to changes in the family and “had been acting grumpy.”

A large percentage of dog bites seen by our surgeons are not done by the family dog. Often a child hugs a dog in public that it doesn’t know, or a child is bitten by a dog at a friend’s or relative’s home. Sleeping dogs who are startled generate bites. One woman who wrote to our office following surgery on her child’s face explained that her children had been tormenting the dog. She grieved for her euthanized dog which was in the veterinarian’s freezer until she could bury it in the spring.

Usually it is obvious if a dog bite requires medical attention. However the severity of seemingly simple little puncture wounds created by dog teeth may be underestimated.

Bites can create pockets in the tissue where bacteria is deposited and infection develops. Irrigation and oral antibiotics are methods of treatment for puncture wounds to dogs and people. People are also inoculated for tetanus if they are not up-to- date.

In the last five years I have coordinated over eighty adoption demos, two reunions and have participated in a number of other large greyhound events. Fortunately I have never observed a significant dog to person incident in these situations. Greyhounds are greeting many strangers of all ages in unfamiliar often congested environments. Dogs who have been exhibiting aggressive behavior at home or who are fearful of people should not attend. It puts the adoption group and the public in peril.

Adopters return dogs after their dogs were startled in the middle of the night and snapped at their owners as they were sleeping together on the bed. I’m aware of three greyhounds that were euthanized for aggressive behavior. A small child was involved in one situation and two of the dogs had leaped off couches and attacked an approaching family member. One of the incidents involved a twelve-year old girl who was walking towards her new greyhound on the couch and had the corner of her mouth severely bitten. She had grown up with two retired racers and, after they died, the family adopted this dog. As the surgeon was treating the girl she asked her parents if they could adopt another greyhound they had met at the kennel! I spoke with her at a Dog Fun Day shortly after the injury. The side of her face was quite swollen and part of her mouth disfigured with an open wound. The mother was devastated by her beautiful daughter’s injury. As a reflection of this young lady’s continued love of greyhounds I was deeply touched when, at a later date at our Reunion, she won a raffle prize. She selected a plaque inscribed: “A Greyhound Prayer. When I die let it be as a pet so someone will remember me.”

Is It Aggression Or Something Else?

How can we prevent dog bites? We can prevent dog bites by observing our dog’s behaviors, understanding the early signs of aggression and nipping it in the bud with appropriate leadership training. Brian Kilcommons and Sarah Wilson state in their article “Recognizing Aggression” that aggressive dogs usually start with simple disobedience. They move on to challenges, threat gestures, growls, snarls and then a bite. Some of the warning signs of aggression they note are: ignoring known commands, bumping into family members, refusing to get off the couch or bed, stopping eating or chewing when approached and tensing up, hiding under the furniture and growling except in play.

I spoke with Steve Duno, animal behaviorist and co-author of the book Leader of the Pack to get his thoughts on retired greyhounds and people aggression. He expressed concern about retired racers going into homes with young children due to the dog’s history of lack of socialization. He would prefer to see them adopted by families where the children are old enough to participate in their care, i.e., eight to ten years old, so the children can play a leadership role. He has had families with retired greyhounds and children consult him and has had the parents establish ground rules regarding the dog: no pulling ears or tail, no laying on the dog, and no disturbing it while it’s sleeping and eating. He spoke about the tendency of many people to pamper and coddle rescued dogs and dogs from shelters. The attitude that “the poor thing has had such a hard life” can backfire for the dog and the owner. By showing no leadership, these people elevate the dog’s sense of self importance and reinforce its aggressive behavior.

Is It A Dominance Issue?

Although I’ve lived with dogs most of my life I found Nancy Baer and Steve Duno’s book Leader of the Pack to be quite enlightening. The authors stress basic obedience training as a foundation. Their book outlines very easy-to-understand, non-confrontational methods of leadership to be followed in the home. They deal with the problem of aggressive behavior by dogs on beds and furniture very clearly. By letting the dog sleep on your bed, couch or easy chair, they say, you are communicating to the dog that he is your equal and can challenge you. The leader of the pack always sleeps in the highest, warmest, most comfortable place. They feel that moving the dog out of the bed is one of the most critical steps in gaining leadership when dealing with an aggressive dog. Baer and Duno stress not to let the dog sleep with children as the dog may see them as “littermates,” may not develop respect for them, and might use aggression to discipline them. If the dog is to get up on the bed or couch, he needs to understand these items don’t belong to him and to get down when you say to.

Although most dog bites seem to occur with no warning, there generally have been behavioral indicators that owners have not understood or have ignored. If the dog’s aggression is not related to a medical condition, it is usually correctable if caught early, but aggression will not go away on its own. By teaching the dog that you are the leader, you will curb its aggressive behavior and prevent a potentially serious incident. 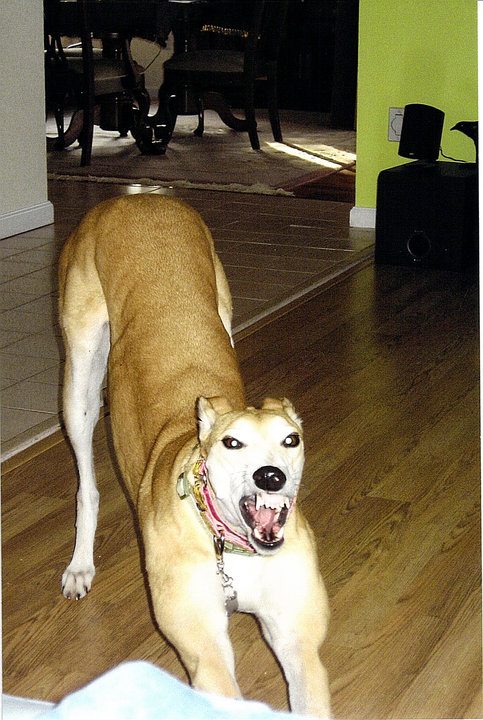 Daisy Nadeau would never bite anyone. This is her version of a smile. Steve Nadeau

ALL RIGHTS RESERVED This article and any photos or artwork contained within may not be reproduced or reprinted without express written permission from the author, artists, and/or photographers.